How I use WorkFlowy

What follows is a guest post from Seth Coster, whose studio makes awesome games. I had the misfortune of downloading one of his games, and, I’m not kidding, it took over my life for a while. You probably shouldn’t play Flop Rocket unless you really want to get addicted, stay up late playing it, neglect your family, stop showering and other terrible things!

Now we’re working on a huge game called Crashlands, which contains dozens and dozens of hours of gameplay, narrative, and lots of complex systems, including crafting and creature taming. Crashlands is big enough that we needed a seriously flexible and useful collaborative project management tool to make it happen, and that tool JUST SO HAPPENS… to be Workflowy.

When our studio was first formed two years ago, we had never handled projects of the magnitude of games. So when we looked for project and task management software, we didn’t know what to get. After trying out a bunch of stuff that was pretty rigid and generally forced us into a particular way of doing things, we got fed up and just resorted to using a shared Google Doc for all our project management.

It was great to have essentially a blank sheet of paper to work with, where we could put everything where we needed and organize it as we liked.

We just added tasks to the bottom of the doc, and as we completed stuff, we’d cut/paste those completed tasks into our game’s patch notes, which were logged just above. This gave us a record of all we had done, and a consolidated spot to store our tasks. Over time, though, this approach got incredibly cumbersome. As the doc grew, it involved a tremendous amount of scrolling up and down, ctrl+F searching, and scanning for what to do next.

Then, we stumbled across Workflowy. AND EVERYTHING CHANGED.

Workflowy allowed us to maintain our old approach — putting stuff wherever we wanted, organizing things at will, and keeping a record of our patch notes — while also removing literally every problem we had previously been having.

The fact that we now have nested lists means we can keep every project in one place, instead of a separate doc for each, and just visit each list as we are working on things in that area. 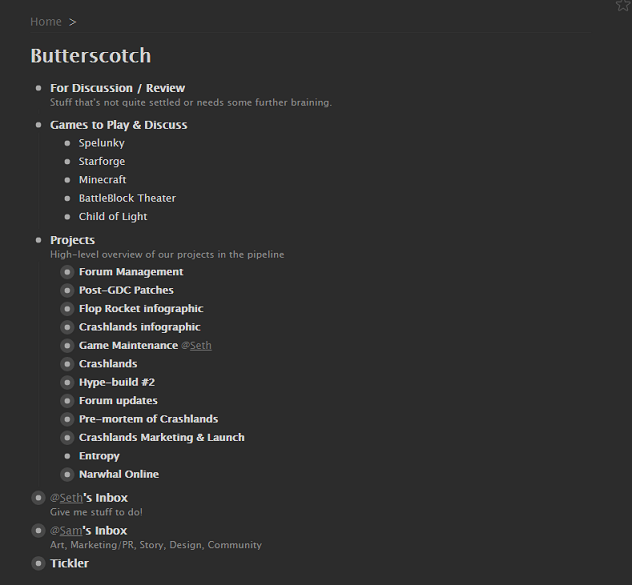 Instead of having to cut and paste completed tasks, we can now just drag them into their appropriate changelogs, and then minimize those changelogs for later viewing. And if we complete a smaller task that we don’t need a record of, we just mark it as complete, and it shoots off into the ether of the interweb, never to be heard from again.

We also developed an “inbox” system, through which we can give urgent tasks to one another. For non-urgent items, we just add tasks on a project basis and tag each other appropriately. If I ever want to see just my part of a project, I just type my name into the search bar at the top, and BOOM! A customized, nested list of everything I have on my plate.

All in all, having Workflowy has streamlined the crap out of our process and made our game development dramatically easier. Anyone working on a mid-size to small team (or even solo) who wants to make awesome things happen… get on this train. It’s going places.

Well WF is great for projects tracking. But it so powerful that a user chould keep in mind some selfinvented procedures. Kind of a discipline.
In my Calendar list there are short todo-s and long project’s trees, which I move from date to date or mark as completed. Every entry starts with project’s name #TAG. No other rules. It’s OK while I use it solo.
One picture costs a thousand wolds. That is my list for today. Two first entries are big projects.
150529
#ROMOIL tasks
#JOHN tasks
#UMX @Gorynych meet
#HOME исп-дь #monthly
#HOME почистить одежду, рюкзак
#HOME Люки – отдать пистолет плиточнику

From that screenshot you can tell they run a tight ship… although, I’d love to tinker with an actual template, since what you see there is barely the tip of the iceberg. I’m particularly itching to see the structure of the “Tickler File”.

Love this! Butterscotch Shennanigans make the best games. Towelfight kept my brain alive through some tedious seminars last year, I tell you. My use of Workflowy is /totally/ different though – I use Trello for organising, and Workflowy is my writing environment.

crashlands … hmmmm
i hope it could be a good one like your previous work butterscotch because you made a PR with your old work so you should better take care of it ..

Please add this feature: unlimited page width. The reason I would like this: I would like to use WorkFlowy for project managment, and I want the dependency of Task 2 on the completion of Task 1 to be intuitively indicated by Task 2 being an indented subheading under Task 1. The problem is that if you have a large number of steps, each dependent on the completion of the previous task, you soon run up against the right margin of the page, and all subsequent keystrokes result in a single character being typed at the far right edge of the page, followed by a carriage return to the next line. Of course, one can Hoist (Zoom In) on one of the subheadings, to bring it to the top of the page and force it to the left, so that lines of text that were previously stretched out along the right margin can then be read on a single line, but it would be so much nicer if the page width would automatically adjust to accommodate right-shifted subheads indefinitely. One can actually do this already in OneNote outlines, since one of the page template options in OneNote is unlimited page width (and page length). However, OneNote does not have the Hoist (Zoom In) feature. (Furthermore, OneNote ignores the # and @ symbols at the beginning of the kind of tags WorkFlowy uses, so Searches in OneNote that start with # or @ find every instance of the text string to the right of those symbols, instead of limiting the hits to the instances that actually start with those symbols.) So I am hoping WorkFlowy will add the unlimited page width feature. Thank you! 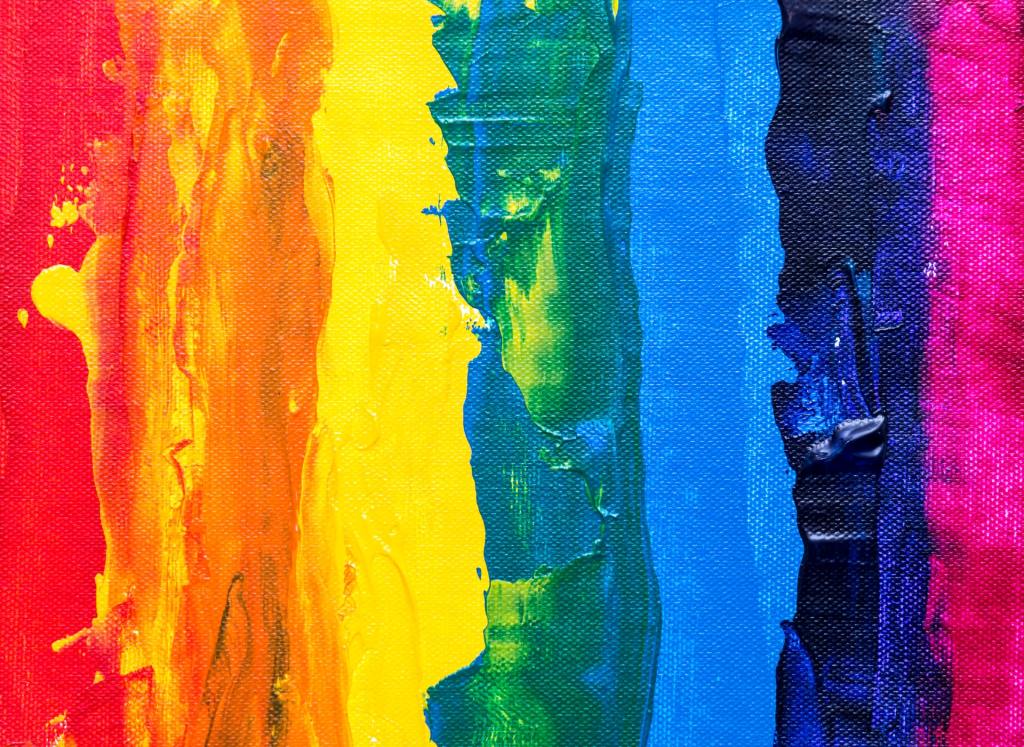