Stephen Pickering sent us an email explaining his approach to tagging in WorkFlowy. We thought it was pretty interesting, so we might as well share it.

Stephen puts a list of all his tags at the top for quick reference and filtering. After his tags he lays out all the rules he uses to organize his WorkFlowy. This layout allows him to be both consistent in organizing his lists and quick in accessing them. Here’s what the top of his WorkFlowy document looks like: 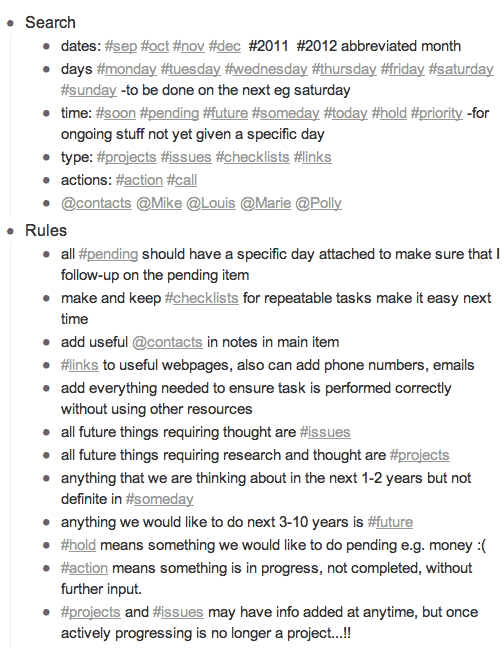 In the relatively near future, we’ll make Stephen’s job easier by having WorkFlowy compile tag lists for you automatically. No technology, though, can free you from choosing a system to organize yourself and sticking to it, and Stephen’s rules seem pretty useful.

Yeah, will be useful!!

Reblogged this on Edtech Box.

Save To(night) – Save to Workflowy on mobile is now available

Hey there Workflowy folks, we’re starting off 2023 with a feature that’s sure to please our mobile users. Regardless of which operating system you...

Hey there Workflowy folks, we have another round of bug fixes we released last month and wanted to share. In this batch, there were...

Hey there Workflowy folks, today we’re releasing a feature that’s going to be ridiculously handy whether you already draft documents in Workflowy or felt...